An echo of William and Mary

A few days ago I was in Kingston town centre. Of late, the weather has been glorious here in London, crisp days with azure blue skies and long shadows.

On my meanderings I happened upon this view of the Bentall’s building, and so I snapped it with my now trusty mobile phone.

Most Kingston locals will know that Bentall’s has been the local department store here in Kingston for over a hundred years. This is the original façade, and a familiar view to many of us. 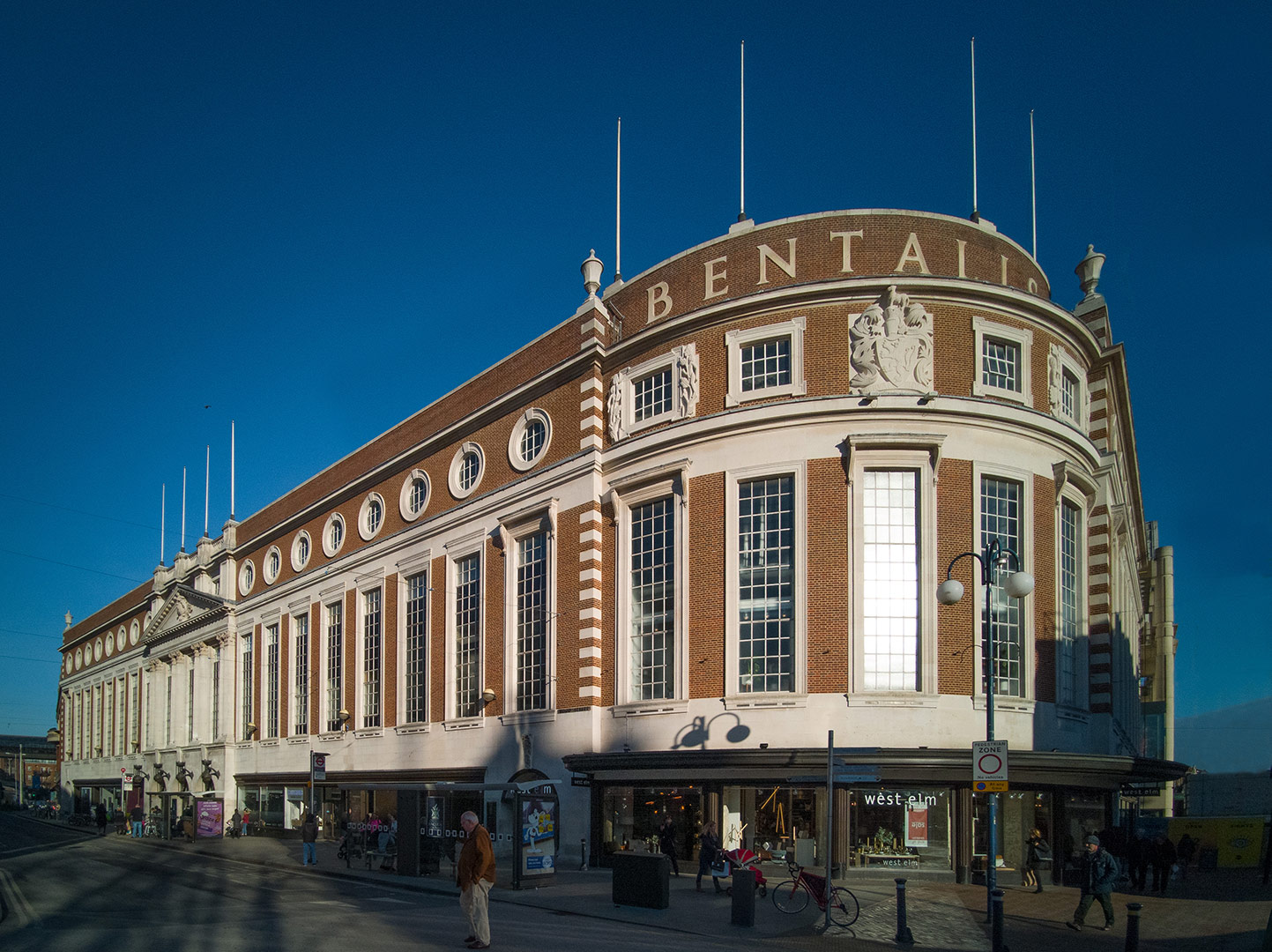 HISTORY: In 1867 the retailer Frank Bentall opened a small drapery shop in Kingston upon Thames.

The venture was markedly successful, and later geographical expansion saw the firm open branches in several other towns across southern England. Around 1930 the then proprietor, Leonard Bentall, employed the architects Sir Aston Webb and Son (by that time headed by Sir Aston’s eldest son Maurice) to design a vast new department store on the original Kingston site, occupying more than a hectare at the corner of Clarence Street and Wood Street.

If you are not familiar with Kingston it’s difficult to see that the façade is not the main entrance to the Bentall Centre. Effectively, it’s a side entrance. Visitors could easily miss it. The main entrance to the central atrium is based around a postmodern glass and steel arch and is currently being restored as part of the 25 year restoration project, and can be seen in the image below: 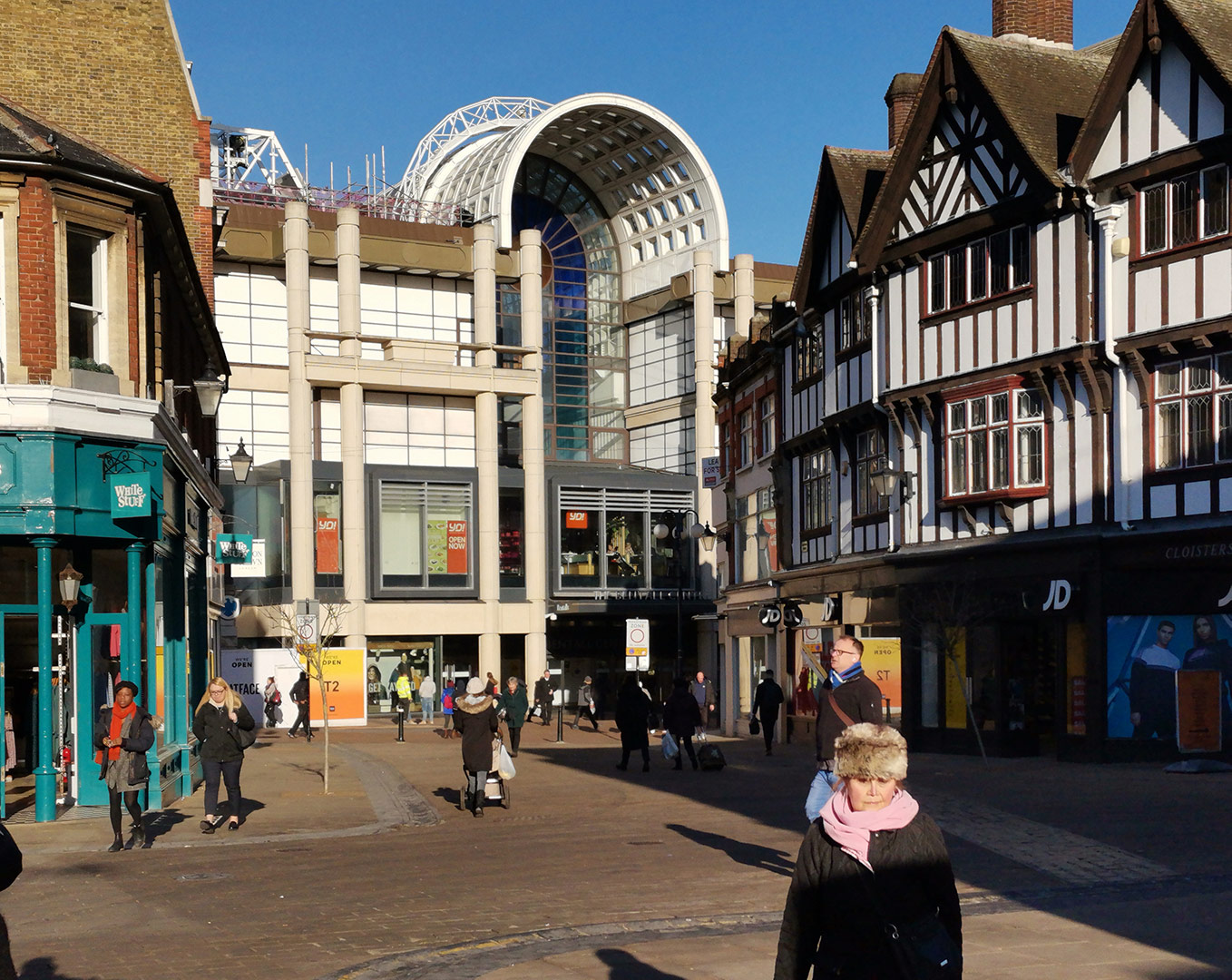 the main entrance to the Bentall Centre – Kingston

Whilst taking the shot of the 1935 façade, I was pondering on some of the details, and the overall architectural style. It looks very familiar, but like so many others I have not really given it much thought, so I took the shot and moved on.

Later research revealed that the baroque style is in fact, the giveaway… And in fact, the oranje (orange) connection is so obvious that it’s hidden in plain view. 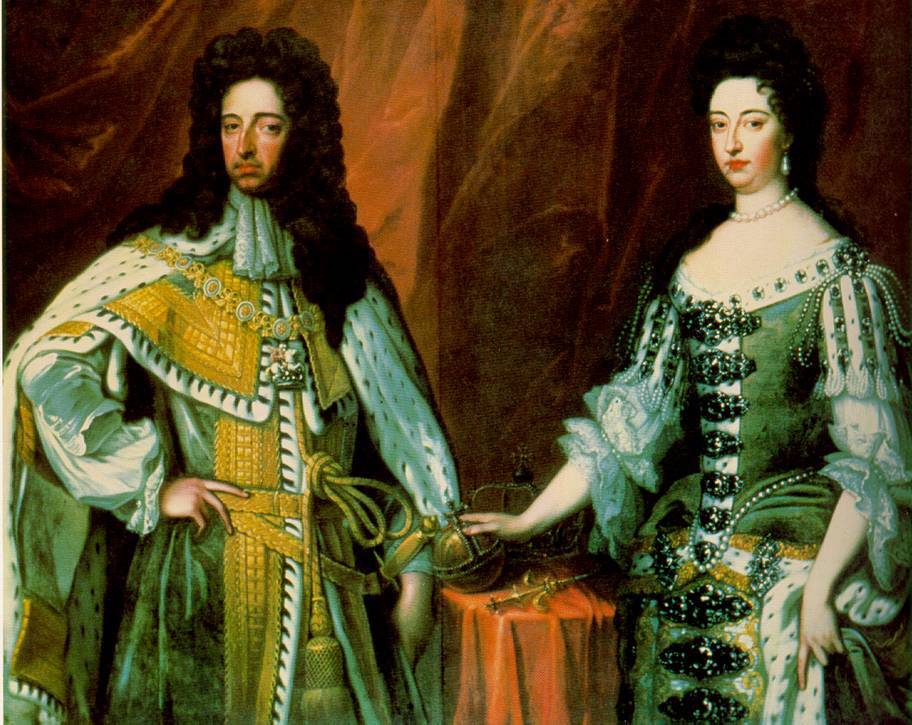 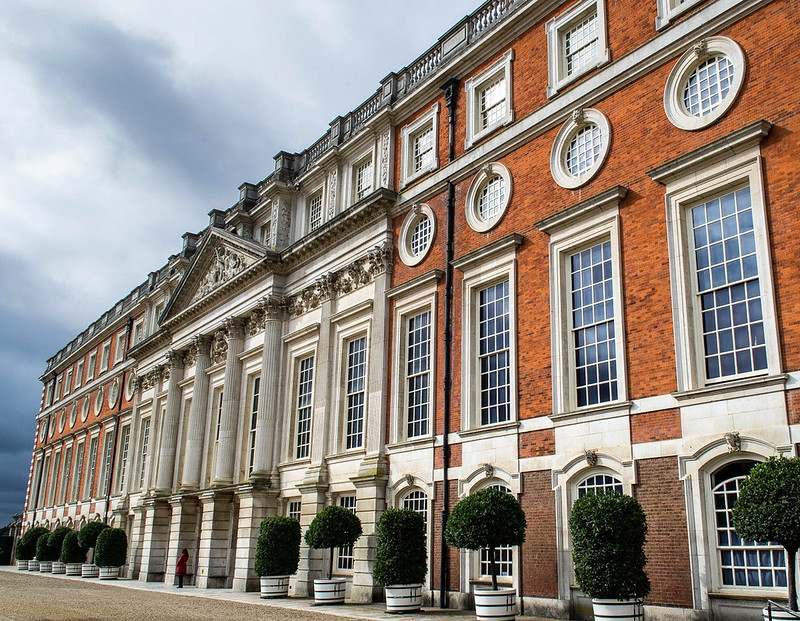 The main difference is that The Bentall façade is 3 floors and Wren’s Hampton Court is 4 floors.

In addition to this the relief carvings are by Eric Gill, who seems to be on just about every significant building of the times.

Retouching Disclosure: I have retouched a crane from the right hand side of the shot and I have corrected the verticals on the building.
Other than this the image is graded only. The sky really was that blue. Gotta love London in the winter.

Further information for those that would like to know more:

Eleven bays to Wood Street are arranged 1-7-3-7-1 (single return bay at northern end is a modern facsimile). Three-bay centrepiece is entirely of stone, treated as a temple front with paired Corinthian half-columns and pilasters and a triangular pediment containing a heraldic cartouche. Three arched openings at ground level with elongated keystones breaking through cornice above; the two outer openings each contain two pairs of glazed bronze-framed doors. Curving bronze brackets in spandrels above, supporting hourglass-shaped lanterns with uplighters and globe lamps. Square windows and balustraded parapet with piers topped by four tall flagpoles. Outer bays at north and south ends also have arched ground-floor openings, with carved keystones bearing the Bentall’s insignia; first-floor windows above have projecting cornices on consoles. Barrel shaped bronze post-box set into wall next to south doorway. Alternating stone quoins to outer corners, with urns on parapet above.

Seven-bay elevation to Clarence Street has arched openings at both ends but is otherwise identical to flanking wings of Wood Street front. Corner section forms a five-bay quadrant, slightly recessed. At street level, a canopy projects over a series of shop windows separated by bronze half-columns, the original non-reflective concave glass now lost. Square attic windows with shouldered surrounds, those in outer bays framed by relief carvings by Eric Gill showing figures amid foliage, that in the centre replaced by a solid stone panel with the Bentall’s crest in high relief. Parapet (restored in 1992) bears the company name in inset stone lettering, and supports four further flagpoles.