Those of us of a certain age will immediately recognise the inspiration for this image.
Of course, it is inspired by the legendary “chess scene” from The original “The Thomas Crown Affair”, by Norman Jewison (1968). Just in case any of you haven’t seen it I have added a YouTube link below so you can watch it. This was shot on location at Toucan Hill on the island of Mustique.

I hope you enjoying viewing the image of Catherine – Colin 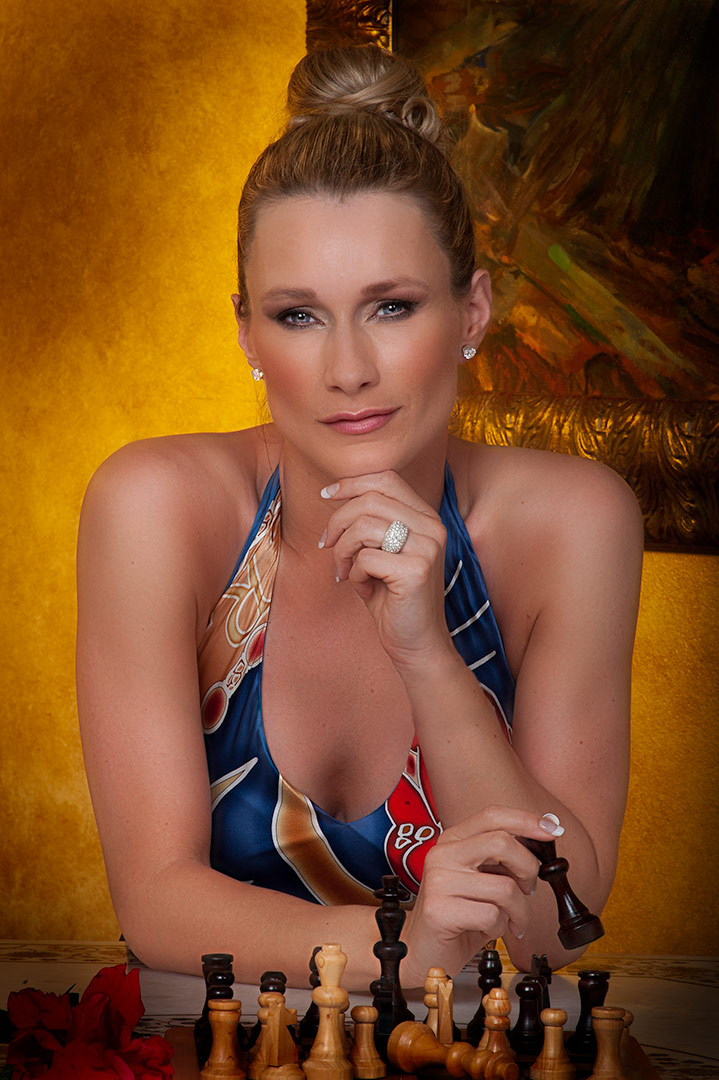 This shot was part of a very large shoot for a luxury villa. It has a fantasy theme and the client and I decided that the”chess scene” would be a lovely image to include in their “romantic nights” section. 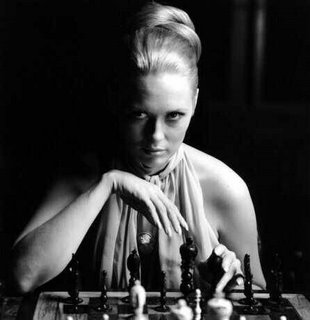 all copyrights acknowledged and accepted

Above is a still taken from the movie. I believe it was used as a promo shot. Maybe someone can let me know?

There’s lots of pixel peeper information to say about this image. Firstly, it never made it on to the website. It is an outtake.

The camera and lens set up.

The camera is a long way away from the model (This is why the softbox is directly behind me). This compresses the shot and brings in the wall and painting, giving the shot more intimacy.
I have the lens stopped down to f16 as I need the chess board and the model to be in focus. Remember, the shot was only to be viewed in low resolution on a website, therefore the chess pieces needed to be recognisable as “chess pieces”.
If I were shooting this in the studio I would open up the lens a little and have the chess pieces very slightly out of focus, however. I am shooting this on a Caribbean island on the other side of the planet from the studio, so a shallow depth of field is too big a risk given the time constraints placed upon this shot. The Facebook groups are full of people saying the image quality degrades the more you stop down… I’ll let you decide. When you stop down you have a wider depth of field. Image quality degradation caused by stopping down is swamped and does not apply. This isn’t astro.
With reference to the shutter speed, I am shooting at 1/250s. This is pushing the envelope. I need to be careful here, as the mono light may drop below this if I turn it up too much more, hence the ISO being set to ISO 200. I would have preferred ISO 100.

The lighting is relatively simple.

There is a single softbox, directly behind me. I am almost enveloped by it. It is around 6ft x 4ft and set horizontally. It is as close to the model as I can get it. (Not close enough)
The decor in the room is sumptious but problematic.  The paint on the walls is sucking in the light, absorbing any reflections. It is also giving a yellow tone to everything. I needed to reduce this a little when I processing the file.
There is a light on a floor stand. pointing at the wall, directly behind the model’s seat. It is a Bowens 1500 Mono It is on full power amd trigger by the slave.
There are also two white reflectors either side of the model, up-lighting her. These are filling in the shadows under her chin and adding the glow to her arms as it reflects off of the crystaline makes up that is emphasising here form.

For those of you wondering how many shots were taken during this session it was 96.

It’s a shame that this image was never used, but who knows I may get another opportunity to shoot it again some day?

The file was processed and graded using Adobe Camera RAW
The post production was completed in Photoshop. As is always the case with my shots this image is ethically retouched. Yep, Catherine really is that stunning. I have not changed the shape of her in any way.
there is no retouching of skin blemishes with the exception of 2 minor spots that I have removed.  The make up is carrying the heavy load with this shot. I always work with great make up artists and any newbies reading this… You should too! Even if your model is your wife or girlfriend, or come to that boyfriend or husband.
the only major retouch was that I decided to remove her watch. To be honest I can’t beleive I let her wear it in the first place… As I previously mentioned, we were under pressure. I have added a grab with it in so that you can see it. 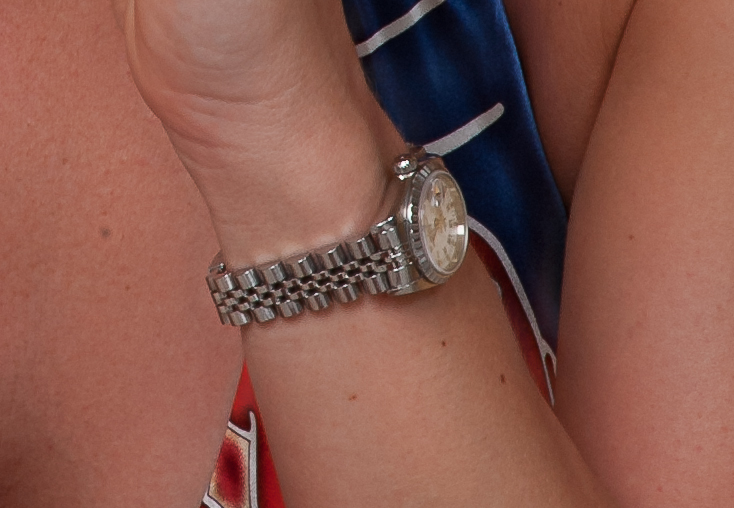 Setting Up the Chess Board.

I know someone will say it, so… No, we didn’t set the chess board up for a checkmate. There was no Sicillian opening and zero consideration to Edward Lasker’s Stunning Queen Sacrifice For Mate

Finally, I thought I’d quickly grab a 100% image so you can see that the skin, make up, and Catherine are all very real. 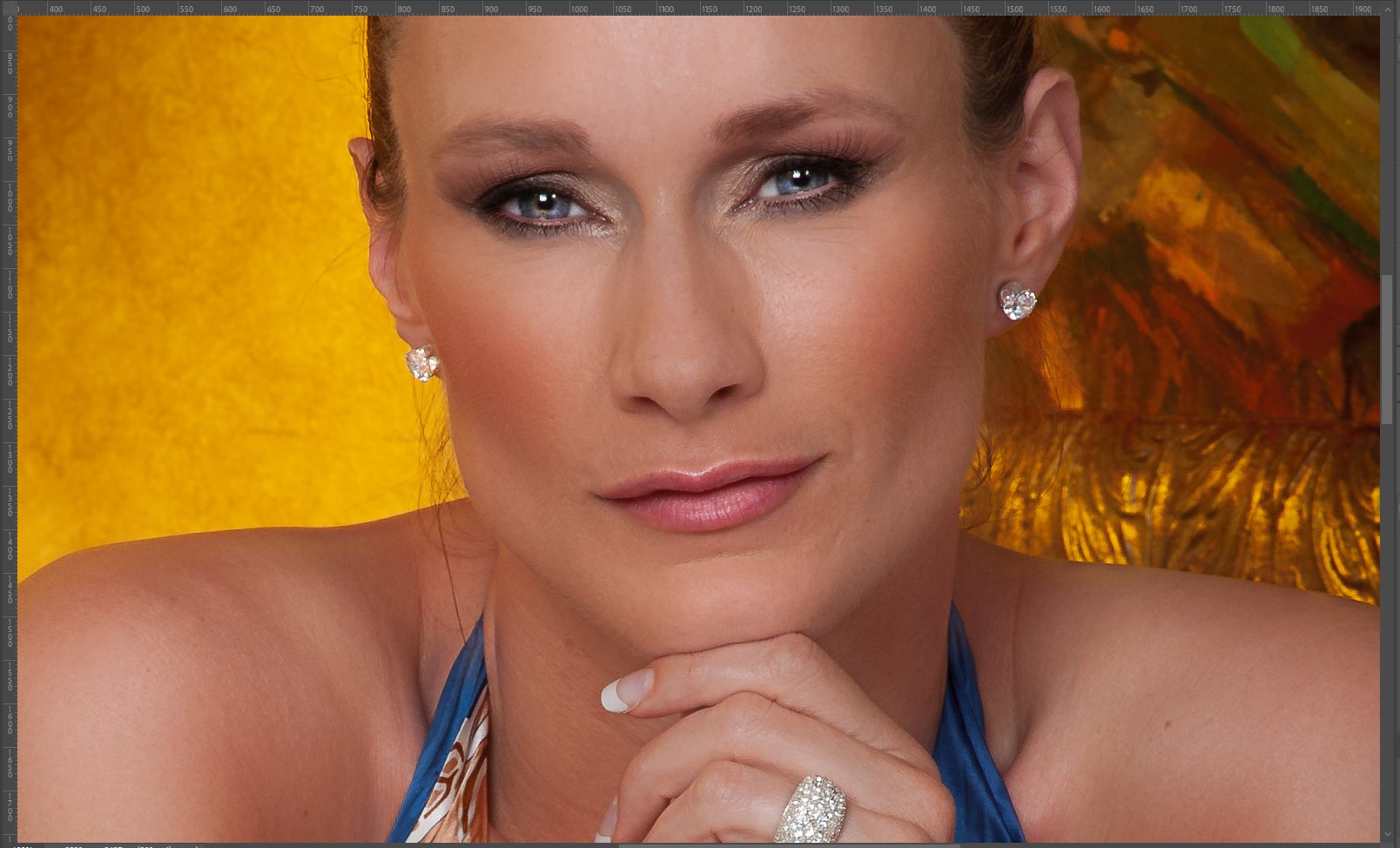 If you have any questions or comments about the article I’d love to hear from you. Just enter your comments below – Colin