Me & Cody Cataluffi are making the news again!!

Last time it was the Daily Mail. This time it’s the Sunday Times, here in the UK. Cody looking ripped, as she monsters her way up Broomfield Hill in Richmond Park, The quintessential blonde female runner, her blonde ponytail bobbing left to right. Pink crop top, bare arms with Garmin watch and guns pumping away!

I hope you enjoy viewing the image. Please feel free to leave a comment below – Colin 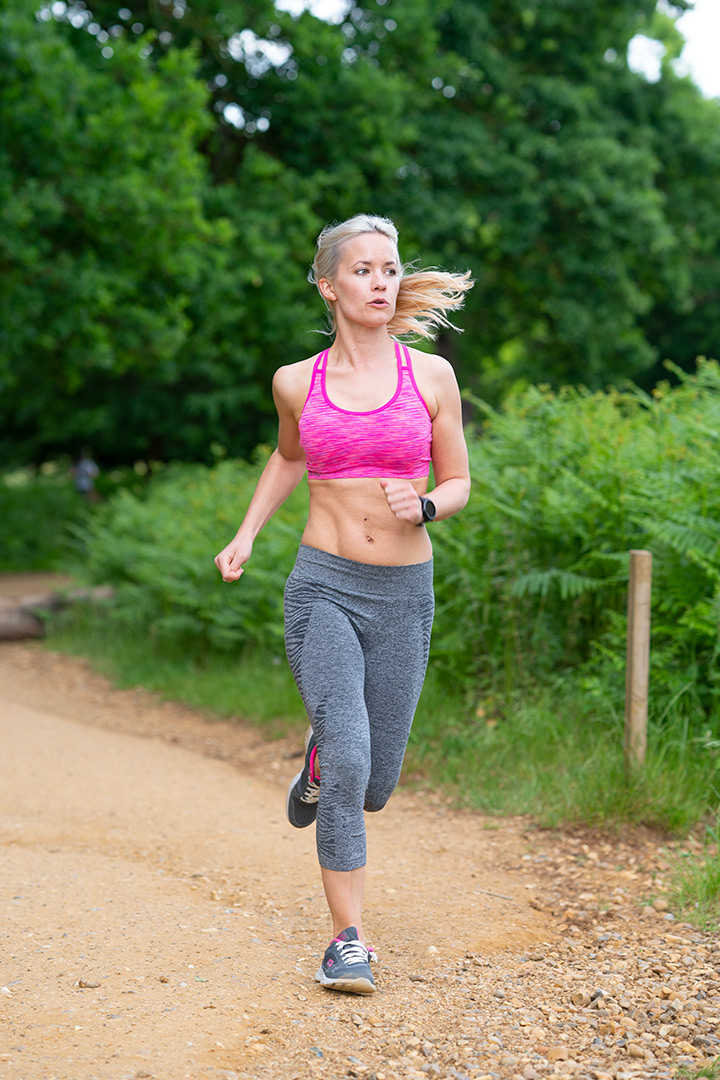 Image Back Story: Originally shot as a non-commercial test in Richmond Park – London after we had wrapped  a client’s shoot. I decided to upload some of these “additional” shots to Alamy, my picture library, as they looked reasonably commercial. Clearly, this is not the best shot i’ve ever taken, but that’s the point when selling from libraries. Buyers are sometimes looking for “authentic” as well as sometimes “polished”. – You just never know what’s going to sell on Alamy or any image library?
But, one thing is for sure. if you don’t belong to a library, you are missing an opportunity to sell your images.

Shot Timing: We could not have known that the COVID19 pandemic was about to strike. The original article was about staying fit in mind and body and using the parks during the lockdown. If the image was not available it would simply be on my NAS.

About the image: This is a simple “point and shoot” shot in natural light. Slightly overcast sky. No lights. But, don’t be fooled by the athletic look to the shot. There is around an hour’s make up to her face and décolletage. We styled and shot it to look “authentic” and not pristine. I guess that’s why the Sunday Times chose it?

Some friendly advice to newbie shooters: Don’t let the dissenters on the FB Groups tell you the Sony FE 85mm f1.4GM Lens has slow auto focus. This is received wisdom that swirls around and around gaining traction. None of the Sony FE lenses has slow AF. The latest lenses, like the Sony FE 135mm GM lens have new motors for an even faster AF, this is true, but no Sony FE lens is a slouch! This is shot with EyeAF in AF-C Mode. I have programmed the lens button to EyeAF. This effectively means, as long as I have my finger on that button, the camera continues to track and focus. In this sequence (in fact, she climbed the hill 3 times) it nailed the focus on around 45 shots. If you don’t have a lens with the focus button you can still use this technique by using the Back Button Focussing on your camera body. Here’s a video from Mark Galer about setting this up. 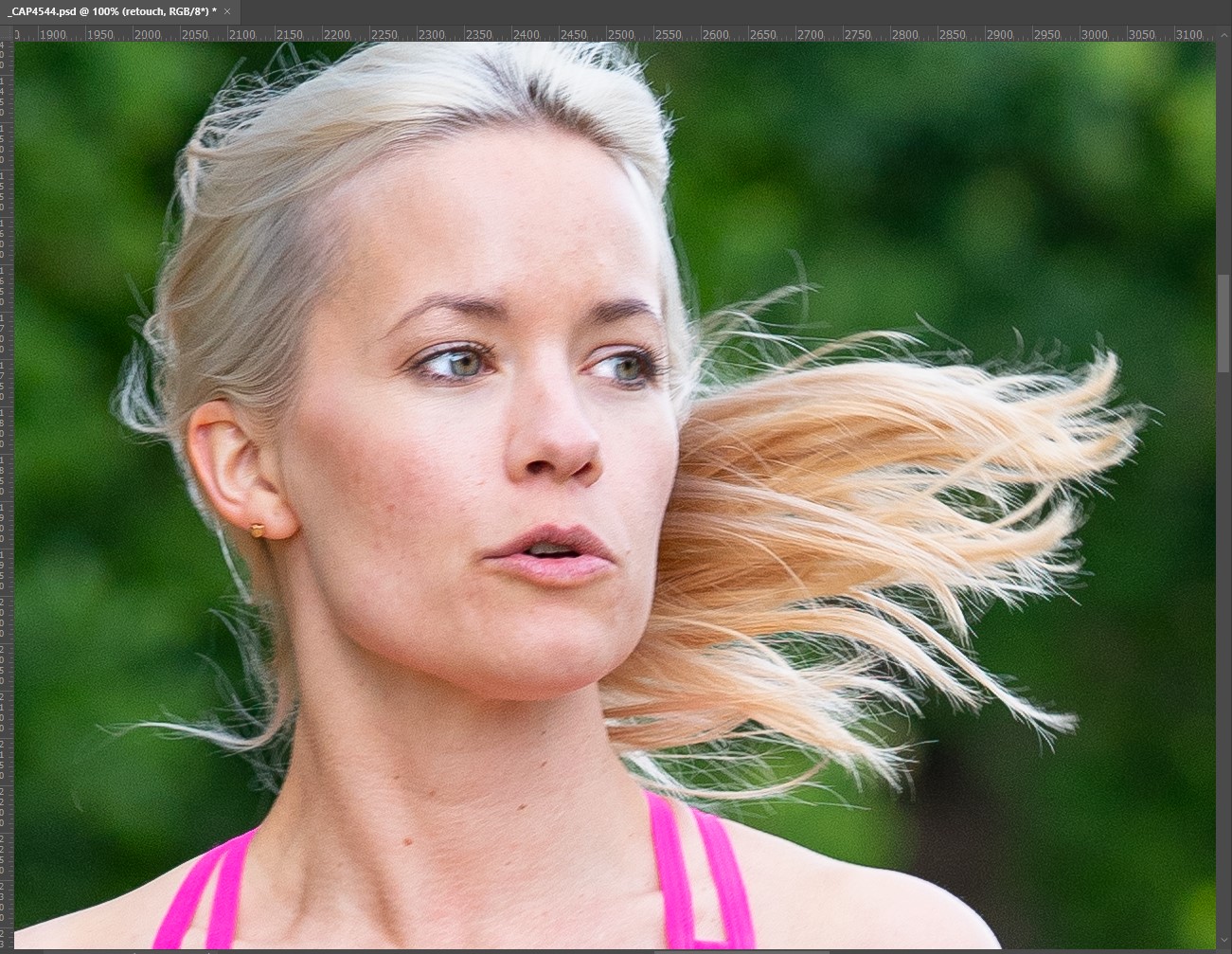 On shots like this, movement is good. Freezing the action is not always desirable. This is not a bird in flight. If you are from the UK there’s a joke from the 1970s in there somewhere

). With lifestyle images some movement can give both flair, and energy to a shot. Other auto focus technicalities to bear in mind are: The auto focus is having to work really hard to keep this sharp. She is running at full tilt, and I am walking backwards as she approaches. In addition to this I am panning right to left, as she passes me. All of this with a lens setting of f2.8!
Note: The depth of field calculator on my smartphone says that it has to find focus within a 26cm (10in) range. Note that there’s more movement in the hair that the face as it whips around.

Pro Tip: You should plan your shoots knowing that you will not nail every shot, especially with a fast moving subject. Blaming your camera manufacturer’s AF because the shot is not nailed is ridiculous when viewed from a pro perspective. This kind of entitled, amateur thinking is simply not realistic. THIS SHIT IS HARD TO DO and rightly so. The tools available to us are better than ever, but you’ll never replace multiple attempts, with as many frames as you can get, within the comfort zone of the model. More frames, more choice, more opportunity of success. T’was back in the day when we shot film and t’is no different today. This doesn’t mean “spray and pray”. It means multiple attempts with short, controlled, considered bursts.

The total of frames shot during for this session

Lastly, you can clearly see uniform “ISO Noise” in the bokeh in the background. Once again this gives “grit” to the shot, and it’s a “gritty” subject. So don’t be tempted to clean it up. Go old skool and simply leave it!! (Remember, this is an A7RIII sensor and it does not have an anti aliasing filter on it.)

Getting the shot: This was shot in a time before COVID 19, we had difficulty shooting the image without other athletes and cyclists getting into the background. How times have changed.