An early xmas present from Sarah McCoy and Harper Collins

I just received notice from my image library that one of my shots from my Mustique collection has been used on the cover of Sarah McCoy’s new novel, published by Harper Collins.
(This article was written last christmas, when I found out, but I thought I’d delay posting it until the book was available to order).

During this period we have moved both house and studio, and I am in flux at the moment, weighing up options on several properties, although we now, at least, have a front runner.
It’s exciting and terrifying all in one. At this time most of my kit is in storage, and I’ve been hiring studio space for my pro photo work!

This sale generated a lovely fee that will buy some mince pies for the Christmas period 😉 (They were yummy!)
It’s an interesting use of the shot. They have flipped the image and added layers to it, to age it. I think they are going for a ’70s vibe

I thought some of you would be interested to see it against the original.

I have added a link above to Sarah’s book on Amazon in case you would like to read it and also linked to the original image on Alamy. 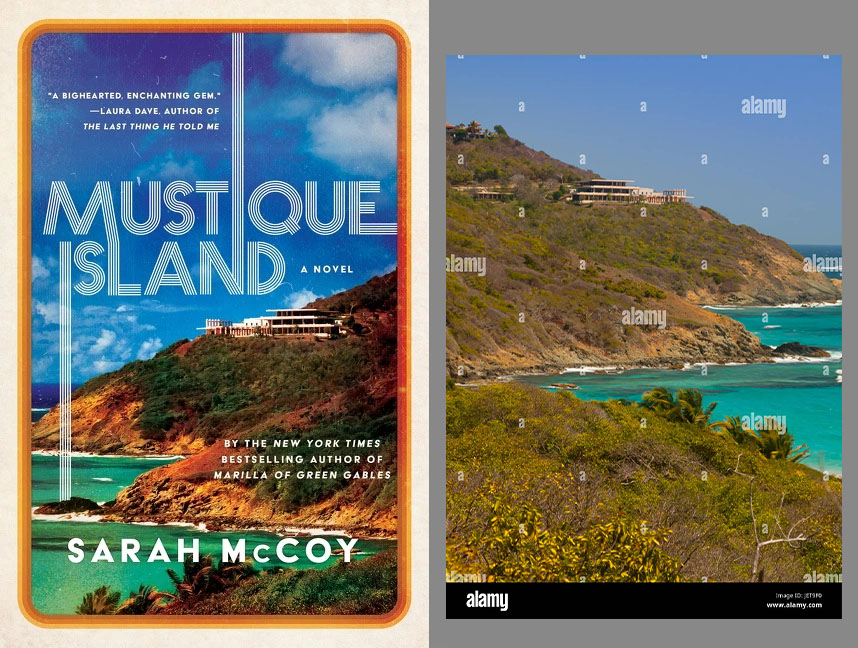 The book is available on Amazon

If you are interested click on the Amazon link below and check it out. It is available as a hardback, on Audible and, on Kindle.

You never know what image is going to sell…

Take this image. I shot it on one of many trips to the island of Mustique. I have serveral clients on the island who have villas, and I usually undertake a tour around the island every year, to refresh any images of the villas that I work with, and sometimes the ones that I don’t.
This image has 2 villas Taliesin (The mordernist Villa) and Rutland Hill (at the top of the hill).  It is shot on my Sony A7R3, and in truth it is simply a “pro-snap”.

Jo and I were tooling around the island in our little golf cart (Mule) and we happened upon this view. Now, I have literally thousands of images of Taliesin, that were planned and meticulously crafted and lit, and it’s this one that Harper Collins liked. Why? Because it’s listed on Alamy. Harper Collins can’t see my library. They can only see what I have on Alamy… You see how this works?

Is it worth you selling your images with a library?

Yes it is. I am with Alamy.

Well, you are not going to become a millionaire, but you can earn some nice fees once in a while. Don’t underestimate the image prep and captioning, but I think it’s worth it in the long run.